ONE: The original inhabitants of America are known as the Native Americans, or American Indians, who lived on the Great Plains of the North American continent. American Indian society was organized into tribes, like the Sioux, Apache and Cherokee, each led by its own Council of Elders. Each tribe had a chief, elected by the Council.
TWO: American Indians believed in a Great Spirit called Wakan Tanka. Their religion was animistic, they tought all animals, plants, object and natural things had a living soul. They often held religious ceremonies, during which they danced to the rhythm of drums. American Indians tried to live in harmony with nature and make good use of natural resources: they loved the land, which they called their mother. They believed the land was eternal and belonged to all creatures.
THREE: The buffalo lay at the very heart of the an Indian way of life: its meat provided food, its skin was used to make tepees and clothes, its bones were carve to make knives, its horns were made into dishes and cups, while its fat was turned into soap. American Indians lived in tepees, cone-shaped shelters, made of animal skins supported by poles. Tepees were warm in winter and cold in summer and they were easy to move which suited the American Indian nomadic lifestyle. Canoes were used to travel along the coasts of the Pacific and Atlantic Oceans as well as on waterways and rivers.
FOUR: American Indian culture is commonly associated with a variety of traditions and symbols including Totem poles and "dream catchers". Totem poles are tall wooden sculptures decorated with statues and designs, which recount legends and celebrate cultural beliefs. A dream catcher is a wooden loop containing a net. American Indians used to hang dream catechers over beds to protect babiesfrom bad dreams.
TITOLI: traditions and symbols, way of life. location and society, religion and beliefs 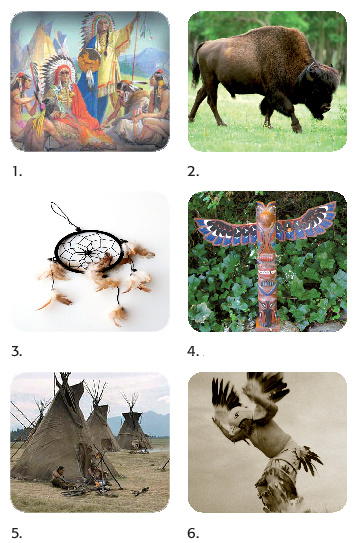